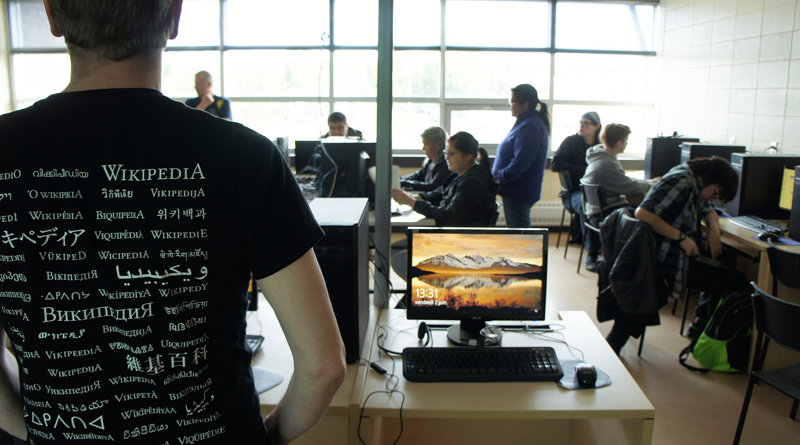 Four years ago, on National Aboriginal Peoples’ Day, June 21, the Atikamekw Nation, Wikimedia Canada and the Language Committee of the Wikimedia Foundation officially launched the Wikipetcia Atikamekw Nehiromowin. Back on this ambitious project, led by one of the eleven Aboriginal nations of Quebec.

Although the language is still spoken by 95% of the Atikamekw nation, the obstacles seemed impossible to overcome during the project’s infancy in 2013. Between the creation of Wikipetcia Atikamekw in the Wikimedia incubator and its official launch into the world of some 300 language versions, the road was full of pitfalls.

In all, 588 words, concepts and expressions had to be translated from the French interface into Atikamekw, including several that did not exist, notably computer terms. “The Atikamekw is a language attached to our territory, the Nitaskinan“, says Thérèse Ottawa, “it is not enough to translate word by word, it would not make sense for us”.

The coordinator of the Wikipetcia project gives the example of a computer mouse: “The majority of the Indo-European languages designate the pointing tool as mouse in English, maus in German, ratón in Spanish, but that would not make any sense for the Atikamekw Internet users that the apikocic rodent is connected to a computer! Linguists preferred the word makonakan which means tool to click”.

On June 21, 2017, Wikipetcia finally comes out of the Wikimedia incubator and goes public. “It was a memorable event, the whole nation was proud to have its own Wikipedia. There was even a 3-hour special broadcast on the local radio,” recalls Luc Patin, a computer science teacher at Otapi High School in Manawan and instigator of the project since 2013.

He teaches the young Atikamekw how to write articles in their brand new encyclopedia: “The young Atikamekw master the computer tools very well, they were born in the Facebook era! But unfortunately, most of them have lost their written language even if they speak it fluently at home”.

This is when the community formed the WikiClub “Metapeckeka” (the ancestral name of the place where Manawan is located today) and the members of the group invited the elders to come and learn how to contribute to Wikipedia, but also to encourage the young people to write in their language.

“This was an unexpected aspect of the Wikipetcia project: the pride of the youth in mastering the encyclopedia, the pride of the elders in transmitting the language and culture to the youth,” says Mr. Patin, “without forgetting that more and more Atikamekw words and phrases are found in search engines. Young people can now do research in their language”.

Recently, the WikiClub Metapeckeka got its hands on a private archive. It consists of a thousand photos taken during the filming of the series Les six saisons atikamekw on Radio-Canada. Filmed in the late 1970s, the series focuses on the Atikamekw way of life on Nitaskinan.

In 2021 and 2022, several projects will result from the generous donation of this private collection. First of all, videoconference meetings will be organized periodically between the WikiClub and the two filmmakers, in order to describe their archive.

In the fall, the WikiClub Metapeckeka and the Conseil des Atikamekw de Manawan will form a jury composed of youth and elders, professional photographers and wikimedians to select a hundred images that will be showcased in various future projects, including an exhibition.

There are other examples of image donation to Wikimedia within the Atikamekw Nation. For example, the WikiClub organizes evenings in the computer class where people can bring their personal or family photos, and they will be digitized on the spot.

During the four years of existence of Wikipetcia Atikamekw Nehiromowin, more than 1,500 articles have been written by about 100 contributors.

The WikiClub Metapeckeka continues its trainings, but also encourages a host of projects and activities such as Wiki Ciwakamihikan (Wiki Café), Lingua Libre, Nitaskinan en photos, Nanto masinatcikan, and soon, a documentary to encourage other native nations to start their own Wikipedia.